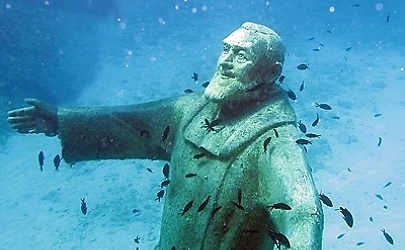 The Gargano, in addition to the remarkable natural heritage it boasts, is also a land of saints: destinations preferred by tourists from around the world are San Giovanni Rotondo and Monte S. Angelo. San Giovanni Rotondo, once a simple agricultural village, is today the destination of numerous religious pilgrimages as the land of Padre Pio of Pietrelcina, the humble friar of the stigmata who lived and worked here. The town houses the tomb of Padre Pio and the new sanctuary dedicated to him, designed in a modern style by the famous architect Renzo Piano. Father Pio also owes the realization of the “Casa sollievo della Sofferenza”, one of the most important hospitals in Italy.

Monte S. Angelo is the highest center of the Gargano, rests on a limestone rock, in which there are numerous caves. In particular, in the one dedicated to San Michele after the admirable apparition of the Saint, a suggestive Sanctuary was built. In addition to the Basilica, Monte S. Angelo also boasts a Norman Castle and numerous churches and baptisteries to visit, as well as the famous Pulsano Abbey.

According to tradition, the Archangel Michele would appear in a second cave, now a sanctuary, three kilometers from Cagnano Varano, this cave is little known compared to the first but equally impressive, is a hundred meters long and is located along the shore of the lake of Varano.

We use cookies to make sure you can have the best experience on our site. If you continue to use this site we will assume that you are happy with it.Ok